Some weeks ago I found the will of Thomas Scoging in the Norwich Consistory Court. Prior to 1858 people had a variety of options of which court to prove their will. As these will's are indexed and put on line it will be much easier to find them. I found a reference to Thomas's will on ancestry.com.

"first I give and devise unto my son Thomas Scoging All that piece of Ground situate in Badingham aforesaid with Cottage there upon lately built.... Also I give and devise unto James Aldous of Badingham aforesaid Labourer All that piece of Ground situate in Badingham aforesaid with a Cottge thereupon lately built.... First I give and bequeath unto my son Robert Scoging and to my Daughter Elizabeth Rye (wife of Richard Rye now or late of Swilland in the said County Yeoman the sum of five shillings each....hereof I do give and bequeath the same unto my Sons William Scoging and the said Thomas Scoging share and share alike.... appoint my said Sons William Scoging and Thomas Scoging Executors of this my last Will and Testament... I have hereunto set my hand and Seal this fourth day of May in the year of our Lord One Thousand Seven Hundred and Eighty Five."

It appears that Thomas was what would be termed an 'owner-occupier' or freehold property owner. From the generation of Thomas to his children and grandchildren times were changing. This change brought hardships on the working class. Two of the major changes were; first, The labourers were no longer living-in with farmers, and they were hired as need be; second, enclosure or the loss of common rights denied them firewood, and the animals shared in common. This met that most relied on parish relief many months every year. To compound the problem there was inflation. The labourer force was increasing and the population as a whole. Many in the following generations were classified as labourers. No probate records can be found for William, Thomas, or Robert. An excellent book pertaining to eighteenth century England is English Society in the Eighteenth Century, Second Edition (The Penguin Social History of Britain) I recommend this book to anyone who wants to learn more about England in 1700's.
As I read this book it appears that the same problems that plagued their society still exist in our society and will always exist, i.e., inflation, unemployment, technology advances displacing workers, corruption, political scandals, crime, etc.
Posted by Don J at 5:26 PM No comments:

William McMurray goes down with the Titanic

I was surfing the web recently and discovered that one of my 1st cousins went down on the Titanic. I never could find him on the census, it was because he was a steward on steamships that crossed the ocean. He was on the steamship 'Republic' in 1909 when it was struck by the Steamship 'Florida' off the coast of New York and sunk. The nearly 2000 people on the ship were able to evacuate. William received an award on that occasion. I remember watching a documentary on the cause of the collision on PBS. William is now part of history displays and information can readily be found about him on various websites due to his fate on the Titanic. He must have been very good at his job, since he was on two of the premiere steamships of that era. What a coincidence, both sank.
familysearch.org has now indexed Cheshire parish registers and now I have his birth date as well as those of his siblings. They were all born in Birkenhead which is just across from Liverpool where there was shipyards. He married Clara Jones in 1902 in the Liverpool area. They had three children; May, Ivy, and Ernest. From a website I learned that Ernest was on the 'Laconia' in 1942 when it was torpedoed by German submarines. This is a well known incident, not only for the large loss of life but how the allied bombers responded. The submariners started rescue operations as they were unaware that 1800 Italian prisoners of war were on board. The submariners were bombed so they ceased rescue operations and changed there future policies on rescue operations. Ernest was lost. I have learned about this from web pages. I do not have any documentation nor access to it as it would be at the National Archives at KEW. The genealogy of William McMurray is on my website.
Posted by Don J at 10:57 PM 1 comment: 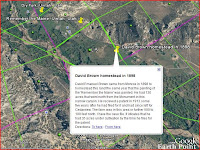 David Emanuel Brown (1851-1927) was a most remarkable man. He was a carpenter, builder, and farmer and left a mark in every community that he lived in. By wagon he traveled from Georgia to Monroe, Utah then to Marysvale, then to Dry Fork Canyon in Uintah County, Utah where he homesteaded land next a Utah State Monument, 'Remember the Maine'. It is a painting on the side of a cliff. The family arrived the same year that the painting was completed, 1898. I have the homestead case file describing the land. His nine children all lived in Uintah and Duchesne counties and have written a history of their times there. I hope to get in on the website soon. Their lives are interwoven with the lives of the Philip Scogings and Mary Elizabeth Brown, his daughter. David moved his family to Marysvale and this is where Mary met Philip Scogings. Soon after David move to Uintah County, Philip and Mary followed. Were talking a lot of cousins growing up in rural Utah, over 40. After 10 years in Dry Fork Canyon he then homesteaded the land of his daughter, Martha Jane in Cedarview. Cedarview was about 35 miles west of Dry Fork. By visiting Cedarview one can get an idea of the hardships and the wear the land had on its occupants. It was in Bennett, Utah, not far from Cedarview that the family of Philip Scogings and Mary Brown homesteaded.
Posted by Don J at 11:20 AM No comments: