Dumfries first newspaper started in 1777. The newspaper article about Aucheninnes came from the Dumfries and Galloway Standard. I put a transcription of the newspaper article yesterday on my website dated January 7 1856. The key to using the newspaper is the paper index that is available. When I was at Ewart library in Dumfries, I couldn't image anyone trying to read the newspaper on microfiche. The print is small and somewhat blurry. The index gets you on the right page and cloumn.
The newspaper covers the Galloway region. The index on this page is Mckenzie's in the area in the 1840' and 1850's. In the parish of Urr there was only one Mckenzie family, that also included Dalbeattie. Dalbeattie was the most populated place in the parish. The Mckenzie's had a long lease on the Aucheninnes farm that apparently ended in 1856. I'm uncertain how long they were on the farm. The voters list for 1835 indicates that they were on the farm in 1835, so they were their at least 20 years or more. Lets hope that they digitize the Dumfries Newspaper soon and put it online.
Posted by Don J at 12:58 PM 1 comment:

Some of my Mckenzie ancestors immigrated to Canada in the 1850's. John Mckenzie was a farmer near Dalbeattie Scotland. He farmed a 200 acre farm called Auchenninnes. The lease on the farm ended in 1856. The family of 11 are recorded in the 1851 census in the parish of Urr. In the 1861 census the family is no longer recorded. Robert and Grace, two of their children, are found in later census years, but the others I have wondered about for over twenty years. Many years ago someone submitted three of the missing to the pedigree resource file; William, Agnes, and Anne. They used the abbreviation for Scotland as 'SCT'. Since the search engine did not recognize 'SCT' as Scotland they remained missing until now. I made the connection on newfamilysearch that connects people by relationships. I have been looking for direct evidence that connects the three to my line. Ancestry.com has indexed the Canadian census records and many vital records, so I was able to search for them quite easily. I found William, the oldest, in the 1901 Ontario census. The 1901 census records a birth date and it is the same as that recorded in the parish registers in the Parish of Urr, Feb 9 1830. The evidence does connect them to my Mckenzie family in Urr parish, Scotland. Agnes married 14 Nov 1861 at the age of 18 to Alexander Gibson in the St. John's, Queen's Road Presbyterian Church in Newfoundland. Their are no Newfoundland records on Ancestry.com.
The remaining three children, John, James, and David Mckenzie, I image would have settled in Canada somewhere. John was born 4 Dec 1833; James was born 26 Oct 1835; and David in 1846. If they lived to 1901 I may be able to identify them in the 1901 census. I think their descendants are going to have to find my website, as their are to many to search.
Posted by Don J at 3:50 PM No comments:

Sometime ago a Scoggins cousin told me that they had Scottish customs in their family, and it was thought that they originally came from Galloway. (Galloway refers to Wigtown, Kirkcudbright, Dumfries counties in Scotland) I have consulted some books listed below that verifies the connection between Galloway and Suffolk. It is reasonable to assume that some of the Scotch would have settled in Suffolk.

On the agriculture of Suffolk By William Raynbird, Hugh Raynbird, 1849
"Culley, in his work ' On Live Stock,' observes, that the Suffolk duns are nothing more than a variety of the Galloway breed, originating in the intercourse that has long subsisted between the Scotch drovers of Galloway cattle and the Suffolk and Norfolk graziers who feed them. This opinion is, I think, incorrect; the breeds agree in nothing else except in their small size and being polled."

Coddenham and Badingham are pointed out as dairy centers. The 20 mile by 12 mile area is where the Scoggins are found, and it provides a reason that a branch of the family settled in Badingham in the 1770's.

General view of the agriculture of the county of Suffolk: drawn up for the ..., 1797 "The country, which is more peculiarly, but not exclusively, the seat of the dairies, is marked out by the parishes of Codenham, Ashbocking, Otley, Charlsfield, Lethei ingham, Hatcheston, Parham, Framlingham, Cransford, Bruisyard, Badingham, Sibton, Heveningham, Cookly, Linstead, Metfield, Wethersdale, Fressingfield, Wingfield, Hoxne, Brome, Thrandeston, Geslingham, Tenningham, Westrop, Wyverston, Gipping, Stonham, Creting; and again to Codenham, with all the places within, being a tract of country of 20 miles by 12. The limits cannot be exact, for this breed of cows spreads over the whole county; but this space must be more peculiarly considered as their head-quarters."

This points to a place where further research can be conducted. The first Scoggins to be found in the parish registers is in Helmingham in 1694. Helmingham is next to Otley parish and near Coddenham. How many Scoggins families came from Scotland? Was the surname spelled the same? Were the Scoggins drovers?
Posted by Don J at 10:22 AM No comments:

I have started to add a new feature to my website for the places I have in Suffolk County, England. I have 148 parishes listed in Suffolk. With a click of a mouse you can go to the 1844 History, gazetteer, and directory of Suffolk, and the towns near its borders ... by William White. It gives a short description and principal residents of each parish in Suffolk. 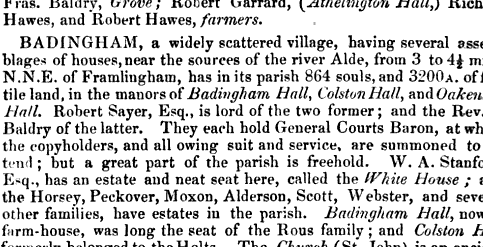 The text above is a hyper-linked to the gazetteer where you can read the complete listing for Badingham and every other parish in Suffolk.

Now by going to a place on the website, such as Badingham, there is a google map of the area, a link to the 1844 gazetteer, and every person who was born, died, or married there. I have a lot of people associated with Badingham parish.
Posted by Don J at 2:10 PM No comments: